I've now got three ultra runs under my belt which I'm pretty pleased about. Two 30 milers and the 38 mile "race" around half of the capital ring.

Last Sunday was the second 30 mile attempt. The route I took was along the capital ring to Finsbury Park, along to Stoke Newington, down to the canal, a lap of Victoria Park, along the Limehouse Basin past the Blackwall Tunnel and back again. 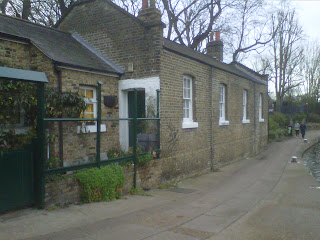 Cute cottage in east London next to Regent's canal

The actual run itself was fine. My left hip is still playing up slightly but it was well behaved on Sunday. I even slashed my time down to 5 hours 35 mins - 25 minutes faster than my first attempt (this works out at around 10.8 minute mile, so with walking included in that my actual running pace is probably more like 9-9.5 minute miles, which I'm happy with). 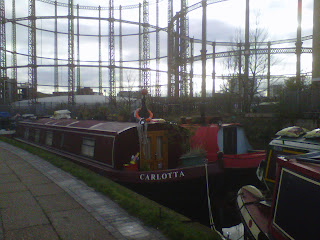 Houseboats on the canal

The thing I am having trouble with is my head. I got to 10 miles and had a minor paddy attack that I didn't want to carry on. I thought I had run further than 10 miles. It was only the thought of having to run back 10 miles anyway that spurred me on to get to the 15 mile halfway point. From there it was plain sailing. I'd passed half way so it was downhill from there.

I'm having real difficulties at the moment with breaking the run down into manageable sizes during the first half, and remaining positive. I get bored quite quickly and then start thinking of how many more hours to go and fantasizing about what I want to eat (currently I'm obsessing about mince pies and cheese - though not together!). So this is definitely something I need to work on - and I'm sure I'll have looootttssss of practice over the next couple of months with the looming scary long and back to backs ahead.

On a positive (see! I'm trying!) I experienced the endorphin trick again at around mile 28, which was great. Absolutely stormed up Finsbury Park hill and along the last mile of the capital ring to home. It's such a great feeling. It feels a bit like the first few seconds of setting off on a really fast run and feeling invisible before the lactic acid kicks in and your lungs start screaming. Very very cool.