My excuse for not running very far last week is that I think some changes are needed to the training plan.

None of these actually give me a real excuse not to have done much last week but anyway. So last week I have mainly been:-

Really enjoyed first hill rep session. May have had something to do with the fact that weather was glorious and I chose Alexandra Palace to begin this part of the new training plan.

Ally Pally, as it's more affectionately known, is an area of North London which has pretty cool panoramic views over London. It's a bit of an odd place as well, like a Z-list star - could have been really, really big but never quite made it. It's probably most famous for being the site of BBC TV in the 1930s but other than that it's a bit of an anomaly. There are occasional enthralling but random events held there such as darts, a dolls house fair and a model engineering exhibition. Mix that in with a gold course, ice rink, and a pub which is more Phoenix Nights than Phabulous and you have Ally Pally.

But, it still has something a little bit special about it, and more importantly for me, it has hills. I thought I would be able to do 10 reps up and down the grassy hill. Nope. I managed 5 reps half way up and down the slope, but it's a start at least! Here's the bit of hill that foiled me..bah..

One of the eight miler's done was through the Capital Ring/Parkland Walk again but this time from Crouch End up to Finsbury Park, around Finsbury Park and back to Crouch End, then the usual route into work.

Me getting out of bed 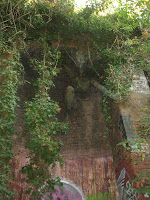 Not happy about the heavy rucksack 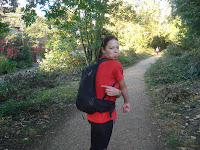 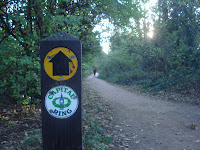 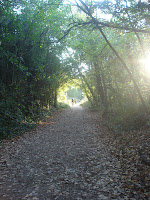 And to top it all off I have FINALLY joined a gym! Only taken 2 months to decide which one. I've gone for LA Fitness, only because it has a pool, it is marginally nearer to my work and the gym instructors are less hairy.

Posted by katerinaemalina at 14:19 No comments:

I quite like running which is a good job as I'm running I ran the Marathon des Sables in April 2012!

Yes. Quite scared. True but I did it.

Other than that I'm a pretty typical runner really.

I started running at university and joined the athletics team, but never actually competed as I didn't think I was any good, and I was too frightened. After uni I took part in a few low key 10k and 5 mile events, and remember feeling really nervous beforehand but buzzing for days afterwards at the achievement.

Then when I moved to London in 2008 my enthusiasm for running really took off. Other than cycling it's the quickest way to get around the city, and meant I got to find out more about our amazing capital - it's by far the best way to understand what London's all about.

I started running with a local running club and signed up for my first half marathon. Running with a friendly club gave me the confidence to think I was able enough to try a half marathon - it's not just for elite runners - runners are nice approachable people! I even surprised myself by getting under the 2 hour barrier.

Following another few half marathons (my favourite distance along with 10k) came my first marathon - Edinburgh. I still fondly look back on the experience. Just unbeatable.

London marathon followed and I managed to get my time down to 3:38. Fairly respectable, though as any runner knows, there's always a faster time in you, you think.

And now my eyes have been opened up to the ultra world. I've enjoyed the experience (and enjoyed eating all the extra food too)!

I started writing this blog to put down in cyberspace all the rubbish that comes out of my mouth or that I think about before, during, and after runs, about everything to do with running. I also wanted to capture why London is so damn cool, and provide others with an amateur account of training for a multi-day ultra, so I hope it will be of some use as well as maybe a little bit interesting/funny/informative etc etc.

Why is the blog called "just a jog"?

I figured the way to get over my scaredycatness of running across the Sahara was to break it down - it's just a jog in the sand right? Obviously you got to do some training and take it seriously but it is something that could, in theory, be done by anyone if they put their mind to it.

Which is ultimately why I love running. You get out what you put in. The irony of running is that it can be "just a jog" but it can also be so much more.

Running gives you confidence, a positive mental attitude, stress relief, a free way to lose weight, time to yourself to think, time to talk to your friends if they run, and a way to sort and sift through all the stuff life throws at you, and I wouldn't be who I am today without it (though would perhaps still like to shift those last few pounds and gain a few ounces in confidence but it's a work in progress..)

Want to get in touch with me?
Mail me at kateemmalewis80@gmail.com and I'll reply.

PS You can now find me at my other blog Mum who Runs where I'm mostly trying to find time for running away from around my family.
Posted by katerinaemalina at 10:35 No comments:

Email ThisBlogThis!Share to TwitterShare to FacebookShare to Pinterest
Labels: About me

So we're aiming to do a 50 miler soon (though I'm still a little hesitant about this!) so figured that if I'm at 10 miles now, I need to increase pretty rapidly to make 50 miles by first week of November. Decided a little hazardously to run for 3 hours this weekend non stop to test out the old leggies on the road. Here's the route (battersea and back)...

Verdict? As suspected - hard. So now a little bit worried about the whole race. Though also I think this is quite good - a little like a reality check. It's supposed to be hard - that's the point. If it wasn't, everyone would do it, and it wouldn't be seen as a pretty damn cool thing to try. On the plus I didn't feel too bad the day after - I could have run again if I really had to.

I think I may tinker with the training plan slightly and focus more on longer back to backs but not running every day. Hoping this will also keep my interest up too.

Anyway, other than that I also remembered how absolutely lovely you feel afterwards and also how much food you can eat!

I've read in articles that you burn 100 calories for every mile you run. I reckon it may be slightly less than this, so say it's 75 calories and you run 10 miles that's 750 extra calories of food you can eat!

What could 750 calories get you? 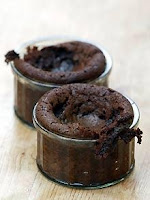 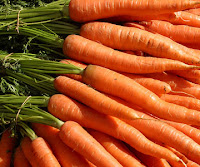 
Posted by katerinaemalina at 10:00 No comments:

Weeks are now flying by. Kinda scary. I've now successfully managed a full week running in without finding some genius excuse to miss training. On top of that I've also managed my first back-to-back run.

So I've run into work then added 10 miles Saturday and 10 miles Sunday then carried on running into work. Legs still feel pretty good though I'm not going to win any prizes for speed. The MDS shuffle takes some practice but I'm getting there.

Here's not quite MDS shuffle, but you kind of get the picture - training is not particularly serious at present. 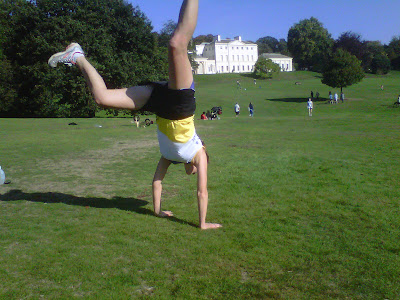 Back to back runs are also a nice way to see the best bits of London. This weekend has been particularly gorgeous. Here's Hampstead showing off some of its loveliness... 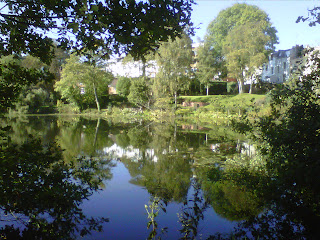 Regent's Canal is also pretty special. Here's the route taken on Sunday which included the canal from Camden leading west to Little Venice and back again. Don't think much can beat hot(!) autumn day running along the towpath, through the eclectic food stalls in Camden, past the animals of London Zoo and by gorgeous old homes framed in old willow trees, and with their own rowing boats waiting patiently to be used. I particularly like the smells and sounds - crunchy autumn leaves underfoot, barbeques smoking lazily, lots of laughter and that summery air smell!


View Larger Map
Posted by katerinaemalina at 12:29 No comments: