Another week down, another week closer to D-day. I have 20 weeks to go.

Because I have my first ultra race next week I decided not to increase the mileage further last weekend, but to do shorter back-to-back runs instead so I'm not too exhausted.

With a splash of the gym and yoga in between. Surprisingly I actually find yoga much harder than running. But I'm happy to report that I'm only 10cm away from being able to touch my toes rather than 20cm. The yoga teacher at my gym is a little scary too. Last week she shouted at me "Why can't you STRAIGHTEN YOUR KNEES?? WHAT IS WRONG WITH YOU??" 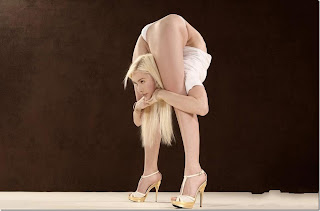 Not me. Impressive shoes though.


The route I took for the 15 miles was the Dollis Valley Greenwalk. I'm beginning to struggle to find decent routes in London that avoids the crowds now the mileage is getting longer, but this is a good one. It randomly starts on the A1, which is a very pleasant way to begin a run.

But after that delight it ventures off into the rural fields of High Barnet, over to Totteridge and Whetstone, and then follows what must be the Dollis river through woodland down to Hampstead Garden Suburb where you can pick up the Capital Ring all the way back through East Finchley, Highgate to home.

Kind of like the northern Northern line, but nicer.

Not quite TFL, but nice try.

Though this route was really pleasant to run I wasn't in the right frame of mind. I think the main reason for this was I had drunk 2 pints and 2 glasses of wine the night before. Not sure that part was ever in the training plan. Though perhaps this will be good to include as presumably there will be beer on tap at each checkpoint in the desert.

The 10 miler on Sunday was miles better (and miles shorter, which is probably why it was miles better). My legs felt great so I decided to run it fast, with intervals. I mainly did this as I had lots of other stuff I wanted to do on Sunday, but I also realised I actually do miss shorter faster runs.

Running many miles sloowwlllly is very very different to running shorter miles faster. I may be stating the obvs here, but it takes it out of you in a different way.

For example, running 30 miles super slow is pretty tiring after about 10 miles when you are running it, with the wierd stabby, joint pains. Afterwards your muscles are generally fine, but you just feel very tired and could eat and sleep for a year.

Running a shorter distance, like a half marathon, fast is exhausting the whole way through, like you want to vomit, and it's 90% certain you'll have some muscle damage the next day and you'll feel stiff, but there is less of the tiredness or joint pain.

Now although I realise neither of those descriptions sound particularly enticing, they both actually are! On Sunday I was thinking "oh fast runs how I have missed you!" I just love that feeling of speeding along at threshold pace and feeling so awake, followed by the lovely endorphin high.

But the longer slower runs give you that "full and sleepy after Sunday roast" kind of feeling.

This is the first time I've put long (ish) runs together like this, and it's something I'll have to start increasing as the weeks go on, but I have been pleasantly reassured that's it's not too bad, if you pace it right and can still function at the end of a run.

I'm still counting on MDS having spa facilities and sofas though each night. Right?