Last Saturday I ran the Amersham marathon. What’s this I hear you cry? Well, it’s a fantastic informal “race” organised by a friend who is also running marathon des sables this year.

The Amersham marathon has been going for five years now and basically involves about 20 or so people who follow the organiser and complete a marathon in the beautiful Chess Valley, on the edge of the Chilterns. 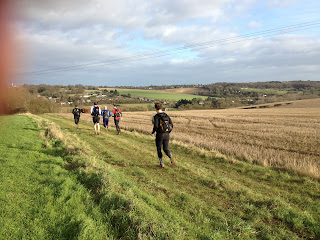 People can choose to run the full marathon, join in at the half way point to run the half marathon, or with 10k to go. This year five of us ran the full distance (which actually ended up being 28 miles according to the Garmin) and then we were joined by another three at halfway.

All in all it was a brilliant run. It started early doors at 7am to ensure we finished by lunch time (v. Important) and mainly followed the Chiltern Way, through glorious rolling farmland and woods. Pretty much all of the route was offroad. At this time of year it was m.u.d.d.y – which was great for me, as it gave me a chance to run in difficult conditions, AND with hills. 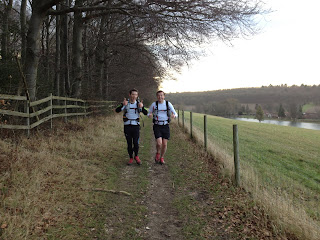 My tactic for the race was to keep the PMA going throughout, as I’ve been having trouble of late with having negative doomlike thoughts, “can’t do it, I’m bored, my knee hurts”, those sorts of thoughts – sure you’re familiar with those old chestnuts if you run!

Anyway because I was running with 4 others, all male, I thought I can’t whinge. I have to be on my best behaviour, so I kept any bad thoughts wrapped away...and it worked!

My other tactic to help to keep the demons at bay was to break down the race beforehand, so I worked on a 10/10/7 split, again which worked really well. The lovely Karen Weir also suggested splitting races up into time periods, rather than miles, which I will try next Saturday at the “Country to Capital” race. This means rather than focusing upon how many more miles to go, you focus upon doing 40 minutes, then reward yourself with a short break (and also in my case some food), and carry on and so on. 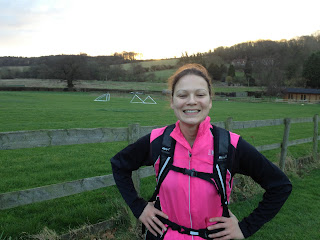 What I am now experiencing frequently on long runs is that I find the second half easier. This was also the case with the Amersham marathon. I’m hoping this is 1) because mentally I know I’m past the half way point, so the race is easier to deal with and 2) because my body is hopefully getting used to the endurance side of things. 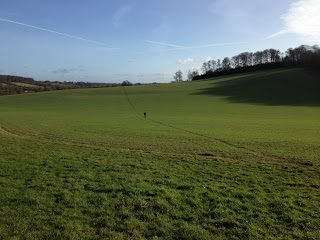 It’s fairly reassuring to know this. I feel I can cope okay with around 30 miles now. So I have the “horizontal” aspect of endurance down, I just need to work on the “vertical” side of it – being able to get up day after day and run for a long old time!

The Amersham marathon also reconfirmed one of the things I love about running. Most other runners are pretty decent, down to earth people. A bit of random banter with a group of like-minded people in the English countryside – what could be better?! Good times.
Posted by katerinaemalina at 12:51